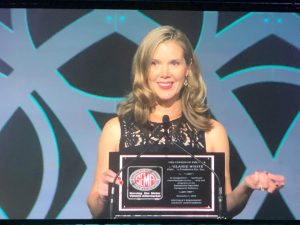 Melanie White, who was recently named as the first woman president of HellwigProducts, received the association’s most prestigious award for SEMA Person of the Year. Family-owned and -operated Hellwig Products is one of the original SEMA Show exhibitors from the 1967 show at Dodgers Stadium. White began working at the company in 2005, but has been long associated with the company her great-grandfather founded in 1946. Today, White is an active industry volunteer and leader, most recently assuming the role as Chair of the SEMA Cares Committee.

“The SEMA Awards Banquet is a highlight of the week,” said Chris Kersting, SEMA president and CEO. “After several days of business at the SEMA Show, it’s a great time to switch gears and celebrate the passion that fuels the industry. The award winners are all examples of this passion and the innovation that we’ve seen all week. We’re honored to be able to recognize them with these industry awards.”