The most powerful and capable SUV in Chevy’s line up, the 3500HD is equipped with a 6.0L Vortec V8 engine generating 360 hp and 380 lb-ft of torque, earning best-in-class tow and payload ratings. While these SUVs may be rated to tow and haul their heaviest loads yet, the weight of a heavy trailer or cargo in the bed will still cause these trucks to sag in the rear, reducing driver control and safety.  By restoring weight to the front tires for better braking, steering, and balanced tire wear, the 3500HD’s appearance and safety are improved.

The Pro-Series helper spring line for the 2017 Suburban features the two leaf stack rated for 2,500 lbs. These bolt-on helper springs improve tow/haul performance by keeping the vehicle level even as loads approach the manufacturer’s maximum rating. The progressive rate of the Pro-Series Helper Spring a withholds activation until a load is present, allowing the vehicle to drive like stock when unladen. Additionally, the user can further dial in the load support for an uneven side load through the adjustable U-bolts. 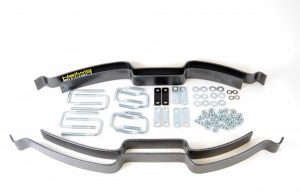